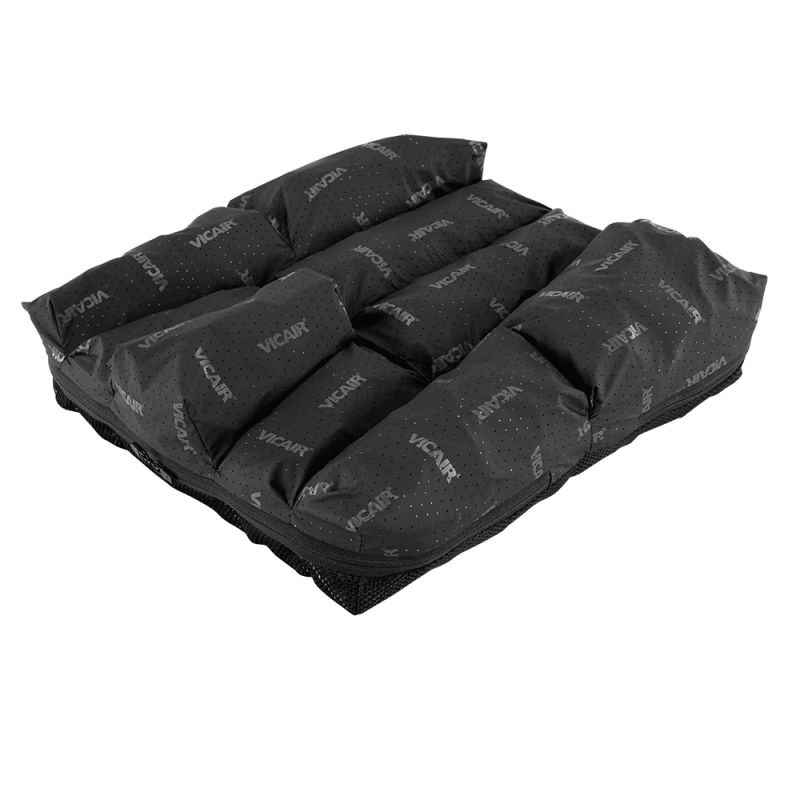 In this report we will be describing a case of a 31 year old female, Miss Y. Miss Y was diagnosed with an anoxic brain injury post anaesthetic which resulted in spastic quadriplegia and severe cognitive impairment. Additionally there is bilateral acetabular dysplagia with complete dislocation.

The anoxic brain injury followed from a cardio respiratory arrest during an eye surgery that Miss Y underwent at an age of 18 months old. Presently she has a high level of tetraplegia and is non-communitive. She requires a wheelchair (tilt-in-space) for mobility and is dependent on full assistance for mobilising, transfers (predominantly made by ceiling track hoist) and all self-cares and daily activities.

Miss Y lives in her own home, just next door to her parents and has two main caretakers who support her in her daily activities. She enjoys getting out in the community in her wheelchair or by driving along in one of the vans of her carers. She enjoys shopping, meeting her mother at work and many other community activities. She loves the spa in her home, enjoys sitting outdoors in the delightful garden and loves being involved in tasks around the home. She enjoys watching television and listening to the recordings of her favourite music and television series. 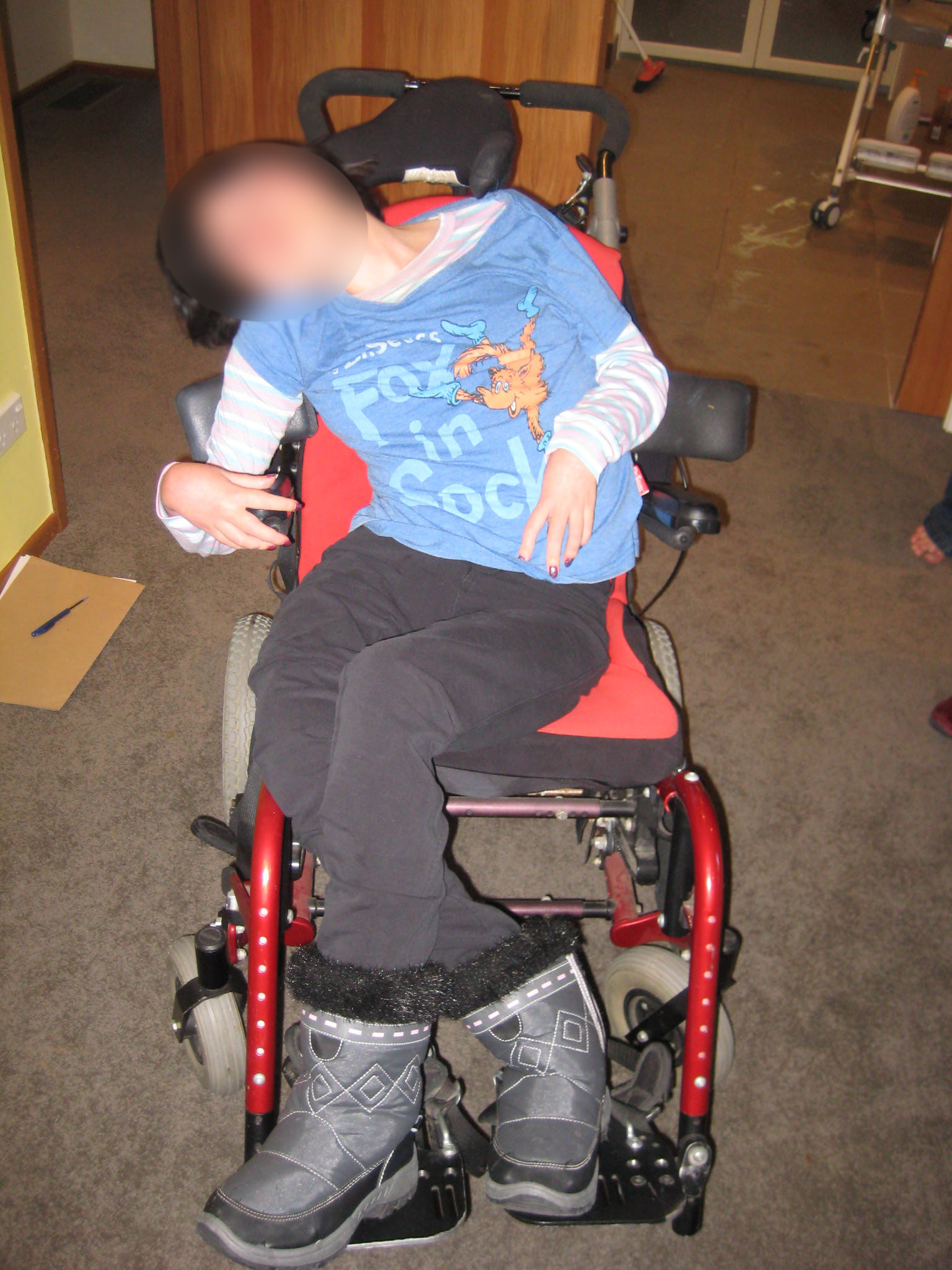 The problem she faced was that Miss Y’s seating no longer met her postural needs and did not support her pelvis, trunk or legs. She was mobilised in planar seating (with no contouring) and the attached flat lateral trunk support were too small and not positioned correctly.

In detail this meant that a number of things needed to be taken into account when addressing her positioning, when lying down the following was noted:

• Her pelvis has an anterior tilt, obliquity (left 1½” lower) and rotation (right forward). With a T-roll institu the tilt moves to posterior and her obliquity reduces by ¼”

• Her trunk shows significant scoliosis (convex to the left) which has its apex at the lumbar/thoracic junction. There’s a rotation through the thoracic spine (left forward) and lumbar lordosis.

• Her left hip is internally rotated and adducted over the midline and her right hip is in external rotation.

• Her left knee has a flexion contracture of approximately 30 degrees.

• There is minimal movement through the joints that enables corrections.

When sitting in a supported seating on a plinth miss Y had the same postural anomalies as when lying down, though her obliquity was increased to 2½”discrepancy.

An x-ray revealed further details about Miss Y’s situation and it was noted that her thoracic alignment is normal apart from mild rotational deformity in the lower thoracic. Her lumbar spine has marked rotoscoliotic deformity, convex left with a Cobb angle of approximately 46 degrees. Her pelvis is distorted with mild subluxation pubic symphysis and bilateral acetabular dysplasia. It also showed that there is complete bilateral dislocation of both hips, with superior displacement of the proximal femora. Furthermore her right leg is internally rotated. 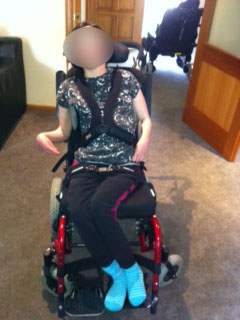 Modifications to Miss Y’s existing seating was considered but deemed not an option because more contouring was required than the seating could sustain. After several trials her wheelchair was set up with the following things to attempt to address the problem at hand:

• A multi-layer contoured foam cushion with additional custom contouring was placed at the pelvis and medial thigh area to support her pelvic obliquity, dislocated hips and her thigh position.

• A dual foam back support with contouring cube system on a solid shell was used. The system was custom contoured in the lumbar and thoracic spine area to support her lumbar lordosis and trunk rotation.

• D-shaped, curved lateral trunk supports (medium on right, large of left) off set were used to support her scoliosis.

This seating system needed to be reviewed and adjusted every 6 to 12 months and prior to starting the clinical trial it was found that it wasn’t supporting her accurately. Limited further contouring was achieved but she was starting to get reddening of her skin over her left ischial tuberosity.

In exploring more options Miss Y attended the local spasticity clinic and had reviews with Orthopaedic Consultants to determine what medical input could assist the management of her dislocated hips and left knee contracture. Surgery, however, is not an option as the family declined any further general anaesthetic due to this being the initial cause of her diagnosis. It was determined that she could perhaps benefit from botox in her left hamstring and alternative seating.

It was determined that Miss Y required a system that she could immerse into to accommodate and support her rather than the system being moulded to her. Vicair cushions have immersive qualities and it was therefore decided to trial a Vicair Vector of 6cm high with an increased amount of Smartcells in the medial thigh support and right rear greater trochanter areas.

The Vicair Multifunctional back support cushion was also trialled, replacing the foam contouring on the existing back shell. It was set up with an increase in cells in the lower three compartments. It was found that Miss Y now had contact with her entire trunk and therefore gained the support in the lumbar region that she required. 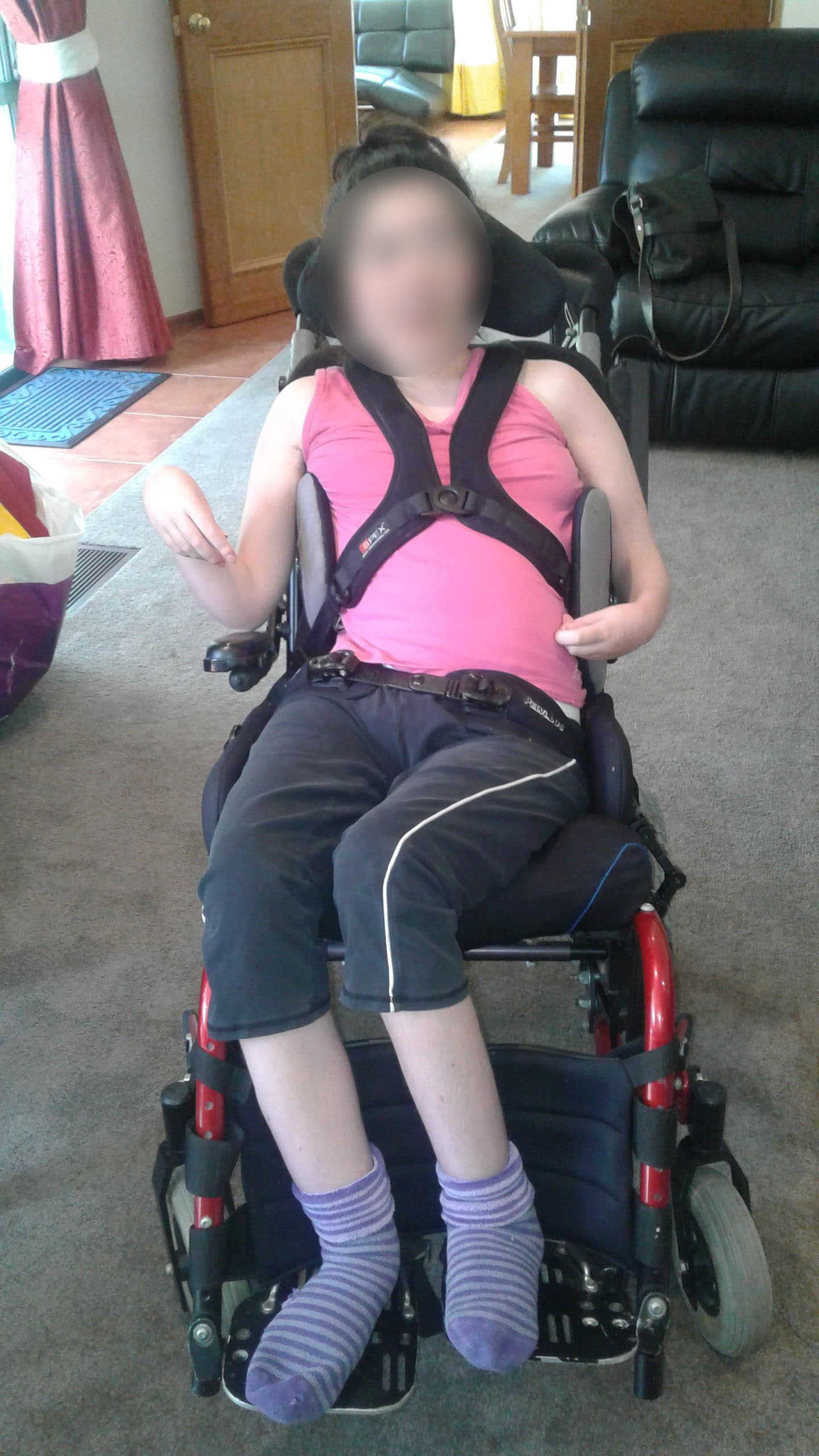 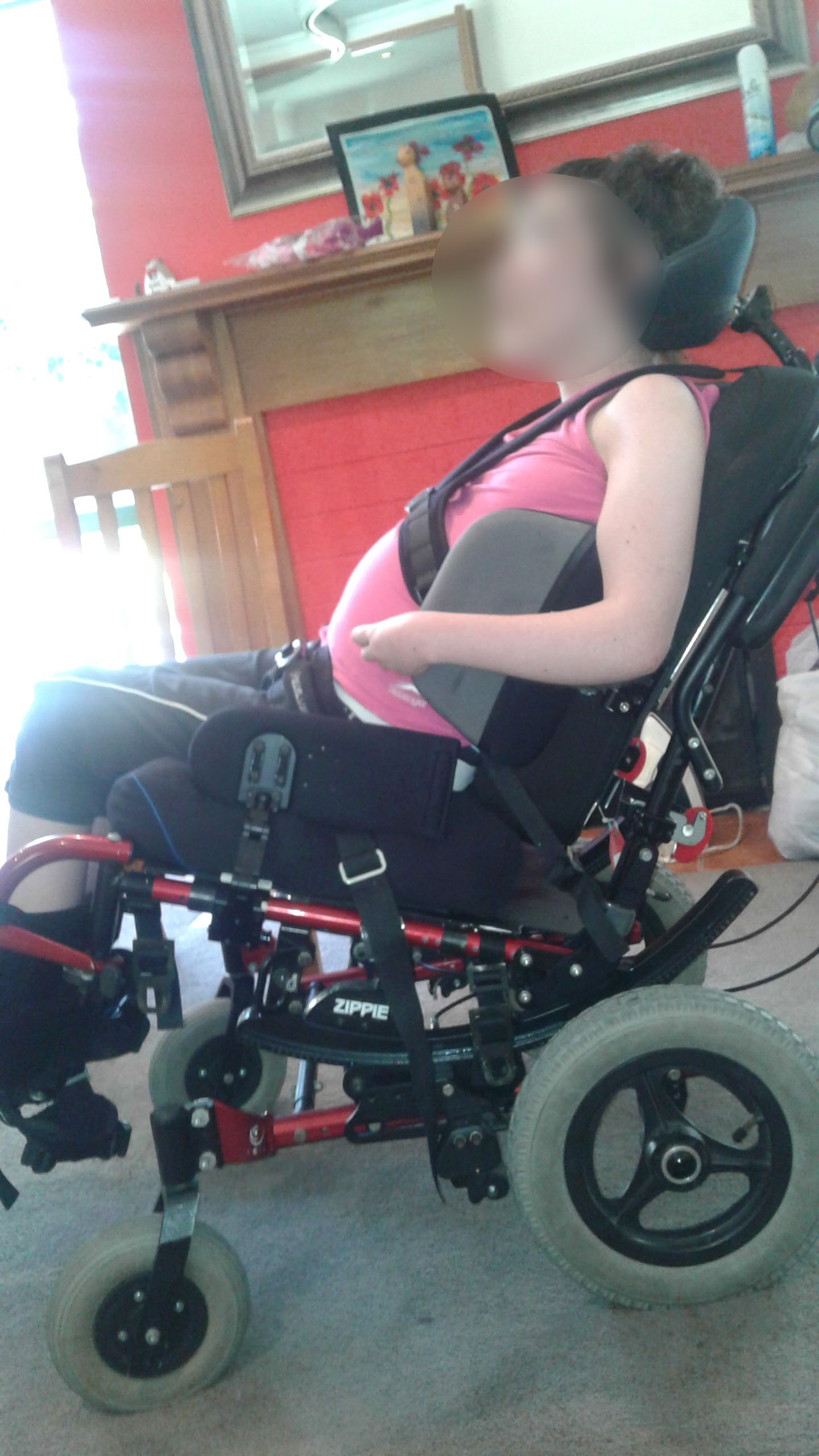 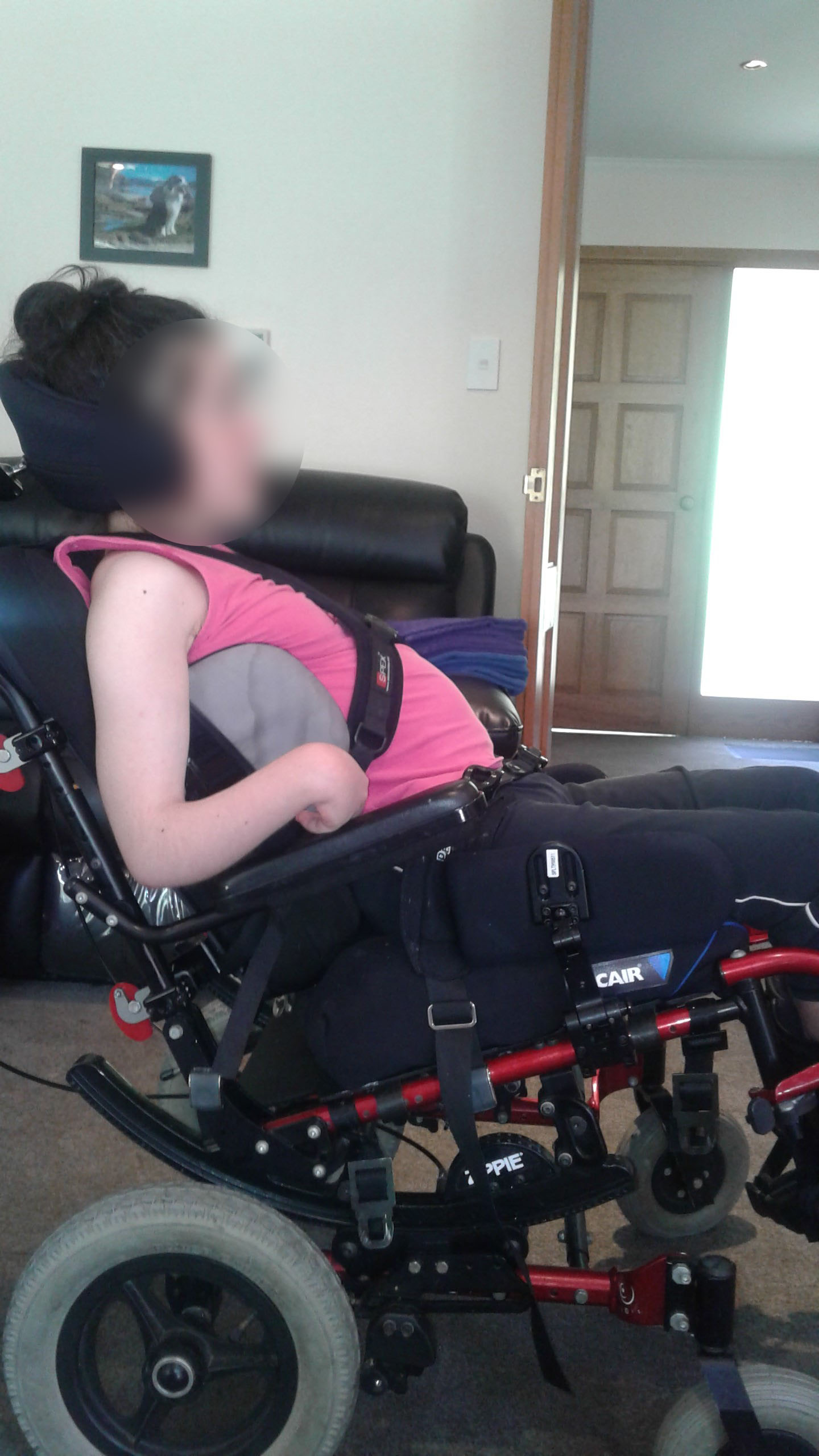 There’s no longer a case of reddened areas as aggressively as before on her left ischial tuberosity and when it occurs it is resolved after an evening in bed. With her new seating solution she is also able to mobilise longer in her wheelchair without the same degree of concern for her skin integrity.

The Vicair Vector O2 has also been a welcome change for the standard 10 cm high cushion as it offers the ability to be washed off by machine washing. After food or drink was spilled the Vicair Vector O2 cleaned off easier. Additionally the Vector O2 was easier and faster to dry out if they happened to be out in wet weather. There was one concern raised regarding where the liquid would go if spilled on the cushion, but this was rectified by the use of a Kylie pad tucked in the cover under the cushion.

Due to the success of the Vicair Vector O2 and Multifunctional back in her wheelchair, Miss Y’s car seat was stripped back and set up with the same products to give the same support when she is using this chair.