Pressure redistribution and stability through immersion on an Adjuster 12 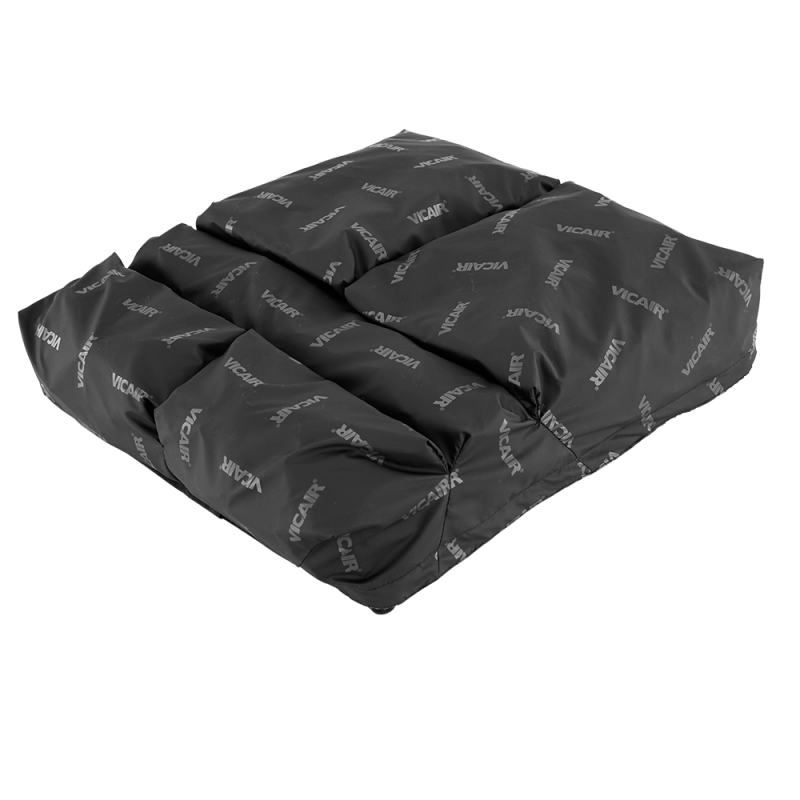 This case report describes the situation of a 46-year old male: Mr. S. Mr. S suffers from an end stage kidney disease (not palliative) and is on hemodialysis three times a week. He underwent a right below-knee and left below-knee amputation in subsequent years. Furthermore he is diagnosed with peripheral neuropathy, hypertension, type two diabetes that is poorly controlled and diabetic retinopathy.

Mr. S. lives alone in his own home. Despite being unable to work, he was mobile, independent and active. His first amputation concerned his right toe as a consequence of gangrene. His right lower leg was later amputated due to an infection and non-healing of the toe wound.

In the subsequent year his left leg was amputated below the knee due to a non-healing and necrotic left heel ulcer. Mr. S. was in considerable pain due to the ulcer. Due to significant small vessel foot disease and no revascularization options he chose to have the second amputation.

Mr. S. was fitted with a basic self-propelling manual wheelchair with a basic flat foam cushion following his first amputation. It was hoped that Mr. S. would be fitted with prosthesis after healing of the stump and that he would return to independent mobility. This goal was however not achieved due to very slow healing of the wound.

Mr. S.’s problem situation consists of a threefold of things:

In an attempt to improve his positioning and try to meet his needs, the wheelchair was reconfigured. The rear wheels were brought forward, to improve access to the push rims. The front-and-rear-seat-to-floor-height was adjusted to enable safe transfers. The changes however turned out to be insufficient to assist Mr. S. in his daily functioning and position him comfortably. 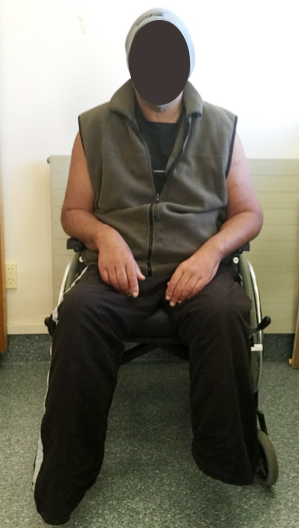 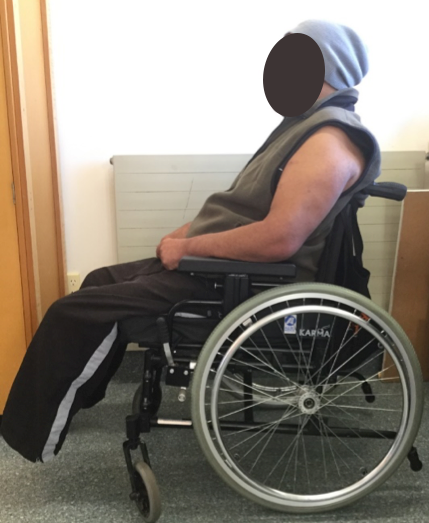 A trial was started with the Vicair Active (9cm) and a Vicair Adjuster 12, of which we will discuss the details shortly, however, two other adjustments were made to the seating system that are relevant to the situational assessment:

Pressure mapping was undertaken on all three cushions: a foam cushion, the Vicair Active (9cm) and the Vicair Adjuster 12. Single peak pressures seen over the ITs sitting on the foam cushion were eliminated as the legs could be used as weight bearing surfaces. 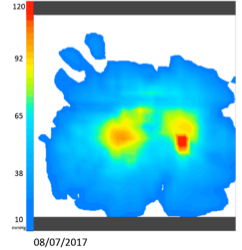 Pressure mapping of the foam cushion demonstrated that Mr. S. was weight bearing significantly through both ITs, but in particular the right with a peak of pressure seen there. It also demonstrated that Mr. S.’s weight was unevenly distributed with almost no weight being taken through the thighs. The picture showed a small surface area of weight bearing. This cushion allowed only one hour of sitting before pain was experienced in the ITs. It is likely that over time the foam was compressing and the cushion’s pressure redistribution properties were diminishing. 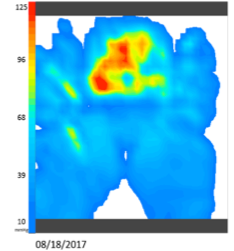 It was thought that the firm front of the Vicair Active 9 would enable safer and easier transfers, while affording the pressure redistribution Mr. S. required. As can be seen from the pressure mapping images, significant improvement was made in relation to the pressure redistribution with a much larger surface area taking weight. This cushion was adjusted by removing 5 cells from both left and right compartment to allow immersion. Mr. S. commented that the cushion felt comfortable and supportive. He sat well with an improved upright posture. He managed to transfer with ease. 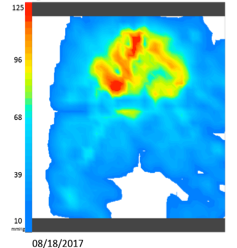 Trial of the Vicair Adjuster 12 cushion was carried out as a comparison. Mr. S. immediately commented that this cushion felt even more comfortable. This is likely because of the depth of the cushion. Mr. S. is a heavy man and could immerse deeply into the Adjuster 12 cushion without the need for cells to be removed. This deep immersion afforded a greater surface area over which his weight was distributed, giving even pressure redistribution and the feeling of greater comfort. The greater immersion available from the Vicair Adjuster 12 cushion also enabled Mr. S. to feel more stable within his wheelchair. The pre-ischial bar provided a barrier to the pelvis sliding forward.

As Mr. S. indicated the sensation of sliding forward in his initial seating system a shear force assessment was made by using iShear.

This demonstrated that Mr. S. was experiencing not only downward pressure, but also dangerous forward shearing forces (sliding force). Shear forces were reduced from 125.5N on the foam cushion, to 83.2N on the Active 9 cushion, then to 62.2N on the Adjuster 12 cushion. This demonstrates that Mr. S. was able to sit more upright, with less sliding forward. The reduction in shear force is likely contributing to the preference towards the Adjuster 12 cushion the increased comfort and to improved sitting tolerance. 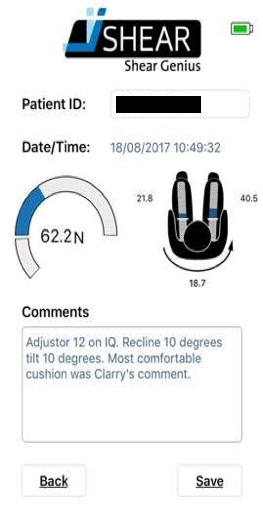 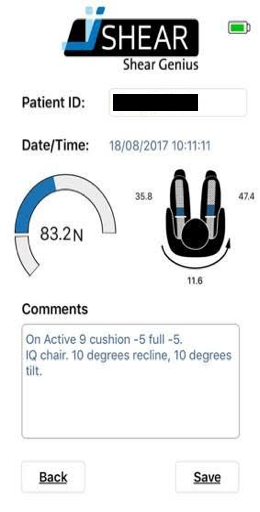 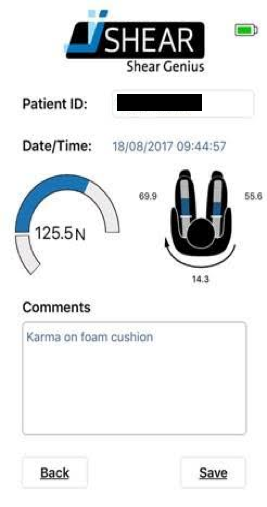 Mr. S. is now comfortably using his new powered wheelchair with the Vicair Adjuster 12 and nxt backrest. He is able to remain in his wheelchair comfortably for the duration of the day. He can now use his wheelchair without the risk of pressure and shear related injuries. The new configuration allows him to safely and independently access his home and community. 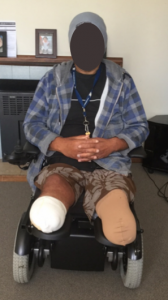 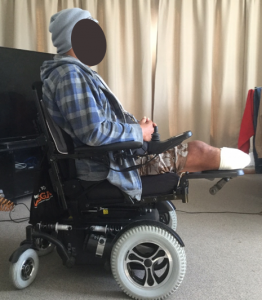 The Adjuster 12 provides Mr. S.  with high pressure distribution properties that are needed to enable him to sit safely and comfortably all day. The pre-ischial bar prevents him from sliding forward, whilst deep immersion provides stability. Furthermore the cushion is low maintenance and easy to understand. The Vicair Adjuster 12 turned out to be the ideal product choice and solution for Mr. S.