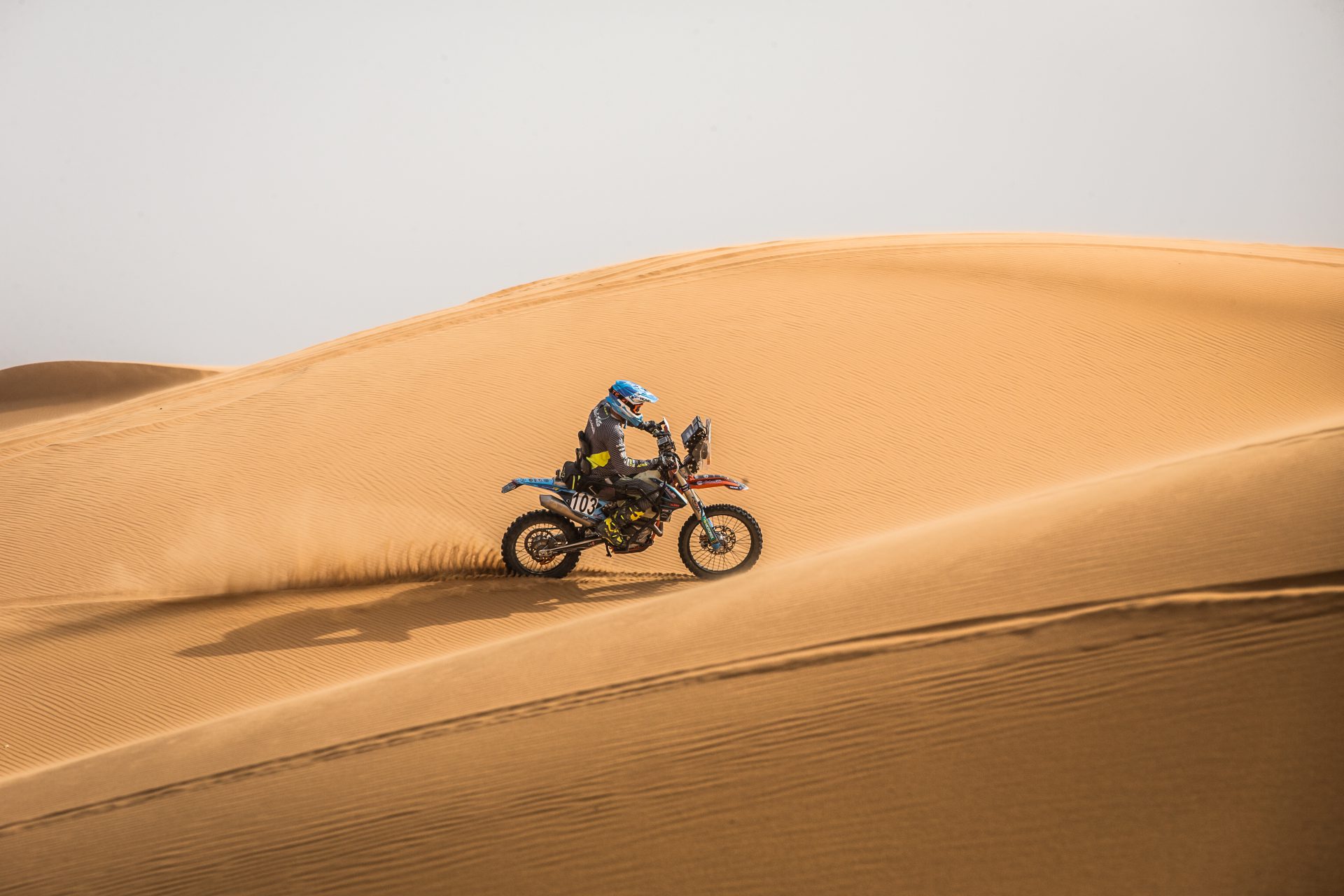 The first paraplegic motorbike rider to participate in the Dakar Rally! Follow his adventures on this page.

Nicola Dutto is the first paraplegic motorbike rider to ride the Dakar Rally. After intensive years of training, optimizing his motorbike settings and extensively testing his customized Vicair motor saddle cushion, he is now ready for this amazing challenge. As a proud sponsor of Nicola Dutto, Vicair followed him during Dakar in January 2019. On this page you will find the latest updates.

Riding Dakar on a motorbike with a Vicair air cushion on it, was the ultimate Vicair wheelchair cushion test. Did the air-filled Vicair SmartCells rise to the challenge? And did the Vicair Custom Made motor saddle cushion keep the skin of Nicola’s buttocks safe from harm? Watch this video and find out! 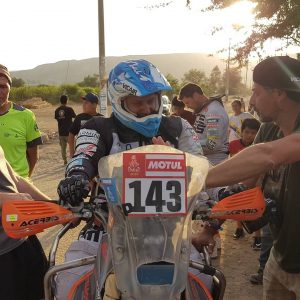 Today is the last day of Dakar 2019. A week ago the Dakar adventure of #VicairHero Nicola Dutto ended due to an unfortunate series of events and a miscommunication. Time for a recap:

Of course having to leave the Rally before it ended and in this particular way, was a great disappointment to the entire team. Still Nicola is proud to have finished four stages: “Many people thought I was unable to finish even one stage. We have proved them wrong. I am proud of what we have done and really enjoyed riding through the dessert of Peru with my friends. It was an incredible experience. Of course I am sad to be out of the Dakar. For me, the team and also my fellow paraplegics around the world. I wanted to show that you are capable of anything if you set your mind to it. Even finishing the Dakar and I am sure we would have finished the race if not for this misunderstanding.”

Difference made by his saddle

During the race Nicola used a custom made saddle cushion developed by Vicair. Nicola: “I am really satisfied with the cushion. I did not have any problems with the temperature, even being out in the dessert, due to the open structure of the saddle. Most people will not understand this as you will need to be in a wheelchair to understand it, but switching to Vicair is the best decision I have ever made in my life.”

Nicola Dutto and his ghostriders did an incredible job by finishing four stages of Dakar 2019. The responses from all over the world show that the team has been an inspiration to many people. Nicola is determined to continue racing. He already spoke with several organisations who would be honoured to have his team in their race. Nicola: “Racing is my life, my comfort zone. I want to continue racing and show the world what I am capable off.”

In our blog posts below you can read more about the Road to Dakar and see the videos made during Nicola’s Dakar Rally days.

Would you like to know more about the Vicair wheelchair cushion range on which his custom made motor saddle cushion was based? Click here.

Yesterday Maarten interviewed Nicola about Team Dutto’s Dakar exit. In this video Nicola tells us about what happened on Thursday during stage 4 (Arequipa-Moquegua) and of its aftermath. The team is now back in Arequipa, where all the Dakar teams are staying to spend the Dakar Rest day. Thanks for following this adventure with us this far. If there is more news to share, we will let you know.

This should have been a video update of Nicola’s Dakar stage 4 adventures….  But due to a series of unfortunate events – which are not completely clear to us at this moment – #TeamDutto is out of the race.

Nicola, Julian, Victor and Pablo are devastated as they were physically able and very willing to continue. What we know now is that the problems started with engine trouble of one of their bikes. The series of events that followed after, eventually led to their way-too-soon Dakar exit. We will post an update, if possible with video and explanation by Nicola, within the following days.

Nicola, your Vicair-family is so proud of you!! Whatever adventure will come next, we’ll have your butt.

Recap Wednesday January 9th – Day 3 was a monster stage of almost 800KM, the track and weather conditions were tough but Nicola’s team soldiered on! We also hear from Elena – Nicola’s wife – for the first time in our video series as she updates us on Nicola’s state of mind and body. We’re rooting for Nico every day, so continue to follow his adventure with us..

Recap Tuesday January 8th – The second stage of the Dakar rally has been completed, it was the first big stage with many miles of special terrain. Get ready for the dust as Nicola and his ghostrider tell you about conquering the sands. 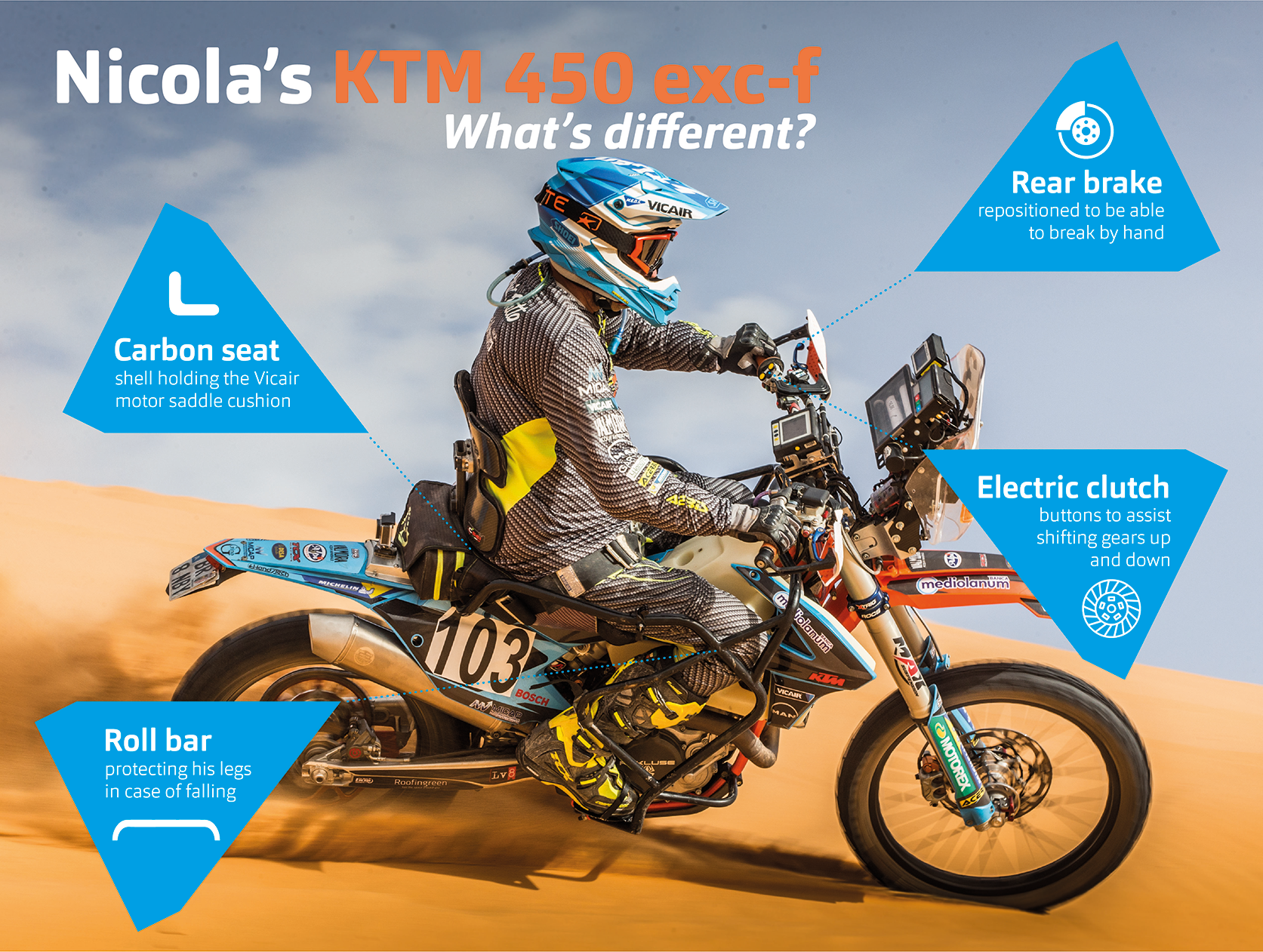 When you’re paraplegic you simply cannot hop on to any motorbike. That’s a given. Nicola and his team have been working on an optimally customized motorbike that will keep Nicola secured, safe and protected. Together with the KTM crew they completely transformed his KTM450 EXC-F to his requirements. Let us show you the details. Click the image to zoom.

You might wonder why Nicola fell in love with the Vicair motor saddle, why not any other type of cushion? He himself calls Vicair the “complete solution” in the Road to Dakar video, so you might wonder why the Vicair saddle works… Well step into our office as our international educator breaks down how it works and how it relates to sitting on a motorbike.

3 January 2019 - Four riders become one: Nicola and his 'Ghostriders'

In order to compete in the Dakar every participant needs a team, for Nicola Dutto having a great team around him is even more crucial. When Nicola competes he is accompanied by so-called Ghostriders, it’s these three incredibly talented men that make participating possible as they assist him in many parts of the race. Together with Nicola, Julián Villarrubia, Pablo Toral and Victor Rivera form a four person team that during a race become one.

The unit works as follows: during a race one rider will ride in front, because Nicola can’t stop to have a look around to see where he is supposed to go. This rider guides him on the right trails and tracks, he’s also the one to ‘catch’ Nicola when he stops for fuel or reaches the finish line. The other two riders follow Nicola in his wake, in case something happens they will be right there to assist him. Say for example that Nicola would fall, it requires two men to help him back up since he is tied to the motorcycle. It’s not just the bike they need to straighten, but also the roll cage and Nicola himself.

Naturally, it is very important that Nicola has a team that he can rely on, he says it feels like family as he has known ‘the guys’ for a very long time. It’s quite a funny thing when you consider that these former adversaries in the Spanish Bajas will now conquer the Dakar together. 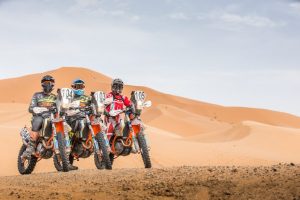 When Nicola first proposed riding the Dakar Rally to Julián in 2015, he thought it was impossible but didn’t want to be the one to say so. They just got down to work and that’s how the team got forged. Julián realized that as things progressed “crazy” was becoming reality, they were competing and getting great results.

“Julián: When you see Nicola draw a dune.. you think: ‘God exists’. He has been training very hard in recent years and looks like a bodybuilder. To be able to finish the race with my friend, with a paraplegic pilot, it seems to me that it would mean writing a beautiful page in the history of the sport, this is something so personal, so intimate and a lesson in life so great, that I have plenty of motivation”.

Pablo first started to compete on a motorcycle when he was over twenty, an age at which many of his competitors already had accumulated a lot of experience. Regardless several years later he would be proclaimed champion of the Spain Raids and finally also competed in the Dakar. Despite having to leave in both editions he didn’t hesitate when Nicola insisted he would assist him in competing in the Dakar. More than a decade has passed since he last enrolled, but this year Pablo will once again savor a new Dakar adventure.

“Pablo: Our main goal is to take Nicola to the finish line and that’s it, there is no forecast of any other challenge at the individual level, I’m very excited to do the best I can and we can complete the race.”

Also returning to the Dakar after more than 10 years of absence is Victor, who in 2007 had to abandon the race after a heavy accident in which he broke his back. After six months in a hospital he promised himself to take advantage of every new opportunity life gave him. He surely did so as he booked many more triumphs up to 2015 after which he stopped competing and even sold his last motorcycle. Then Nicola crossed his path and he was convinced to come along to the Dakar.

“Victor: The only goal is to all reach the end, we are the eyes and legs of Nicola, every day will be a triumph for us, so we consider the race day by day. People find it hard to understand, that a paraplegic driver competes on a motorcycle is not exactly normal, in the race we are just one.”

Four professional motorbike riders, but also four dear friends that form one close family. You can keep on following their adventure on our page and socials as they conquer the Dakar!

Take a look inside the Vicair Design Studio and learn more about the design of the custom made Vicair motor saddle cushion. Meet Klaran, the product developer that was involved in creating the very first and latest versions of the cushion. 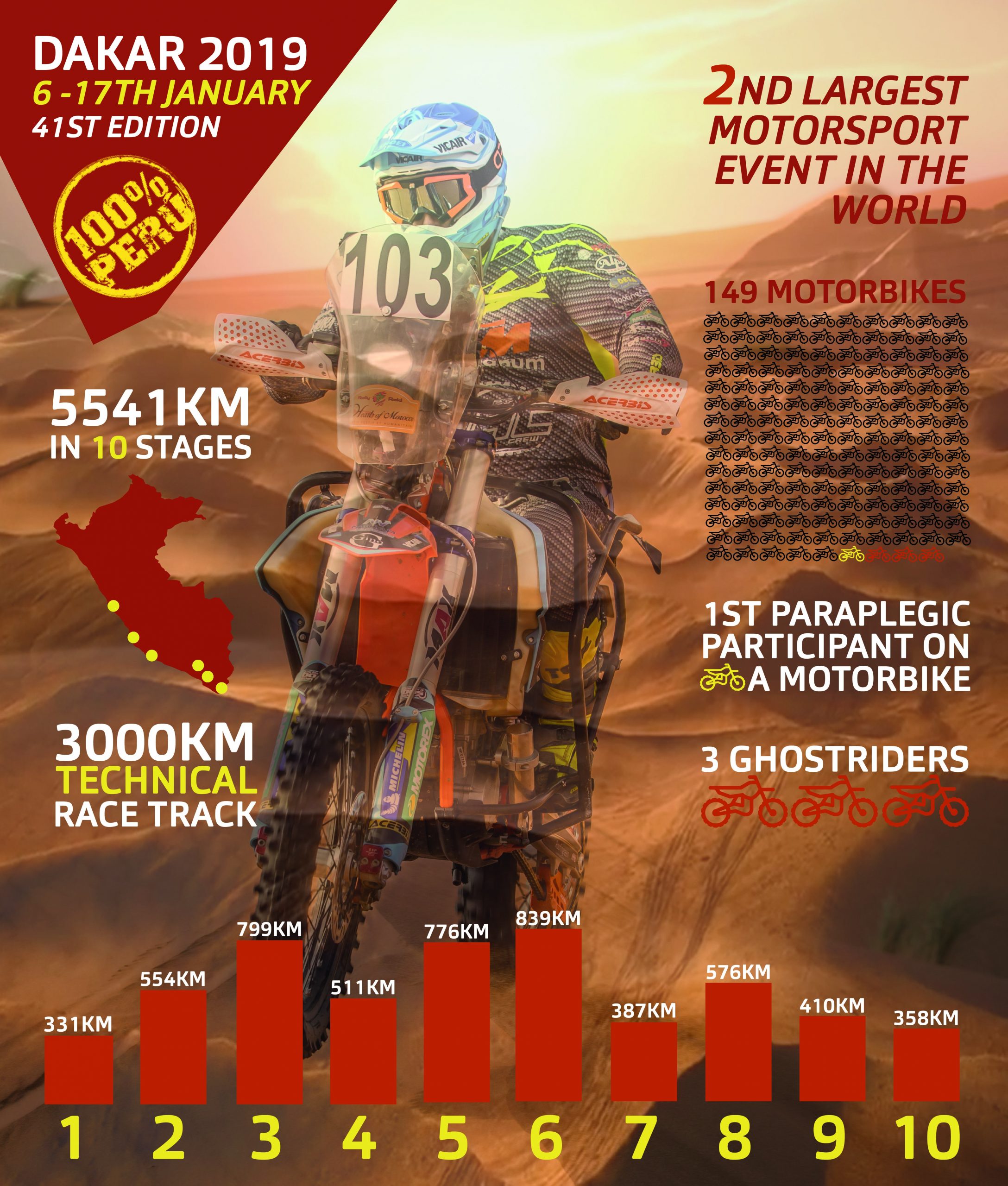 Riding on 2 wheels and a Vicair cushion through sand, rocks and mud… What exactly is Nicola Dutto facing in Peru this January? We have made an infographic for you.

As proud sponsor we will be following Nicola and his team in Peru. Maarten is there in January to make daily video reports about Nicola’s Rally days. We will share them with you on this page. If you have any questions for Maarten and/or Nicola, you can send them to us via Facebook, or send an email to vicairhero@vicair.com. We will try to get them to answer from Peru.

What happened before Dakar 2019 - Nicola's story

Nicola Dutto is a professional motorbike rider. During his career he won many races, with the Italian and European Baja Championship in 2008 and 2009 as major highlights. His life completely changed in March 2010 when he broke his spinal cord in an accident during the Italian Baja… Watch this video to learn more about his story.

What happened before – Read more about Nicola’s story:

Nicola’s Road to Dakar and how he met Vicair.