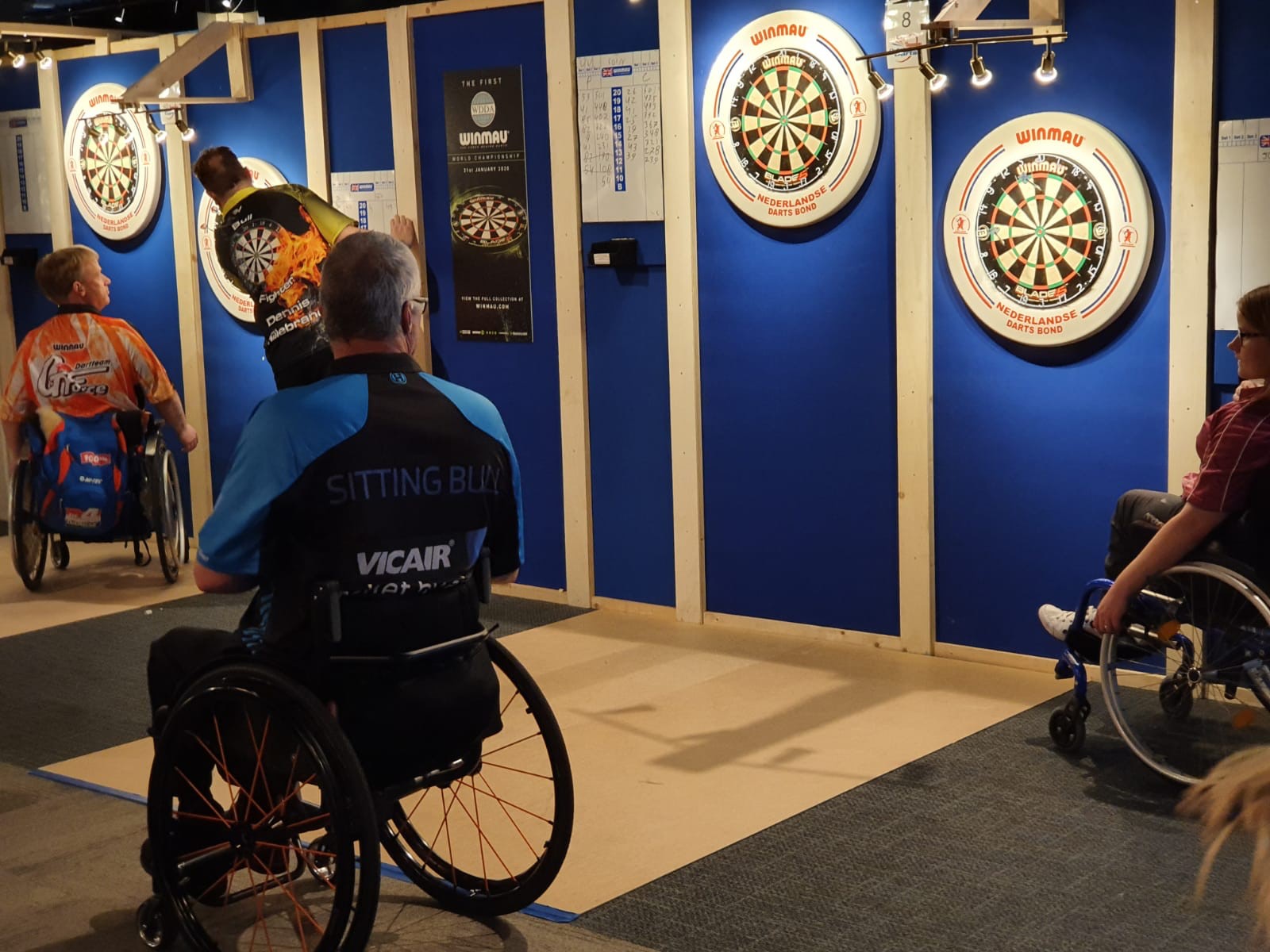 Marcel van Kleef was born with Spina Bifida in 1965. Until the age of 14 he was able to walk with several different aids, such as braces and adjusted shoes. It was then decided that his ankles were to be permanently fixated via surgery. After the surgery Marcel was not allowed to walk for a year. This caused the muscles in his legs to weaken to such a degree, that he was often forced to make use of a wheelchair. In 1998 his lower left leg was amputated, making him fully dependent on a wheelchair.

Marcel started playing darts about 20 years ago, at home on a digital board (soft tip). He then progressed onwards to playing with steel tips together with a friend in a local community center. For a while he lost sight of playing darts, but has now picked up his old hobby again and is even playing competitions. He plays at a team called ‘Sagitta’. The home of Sagitta is at ‘Lokaal de Kroon’ in Wormerveer (the Netherlands) and they have a fixed day on which they play darts (Friday evening). The games always start around 20:30 and continue on into the late hours of the night… 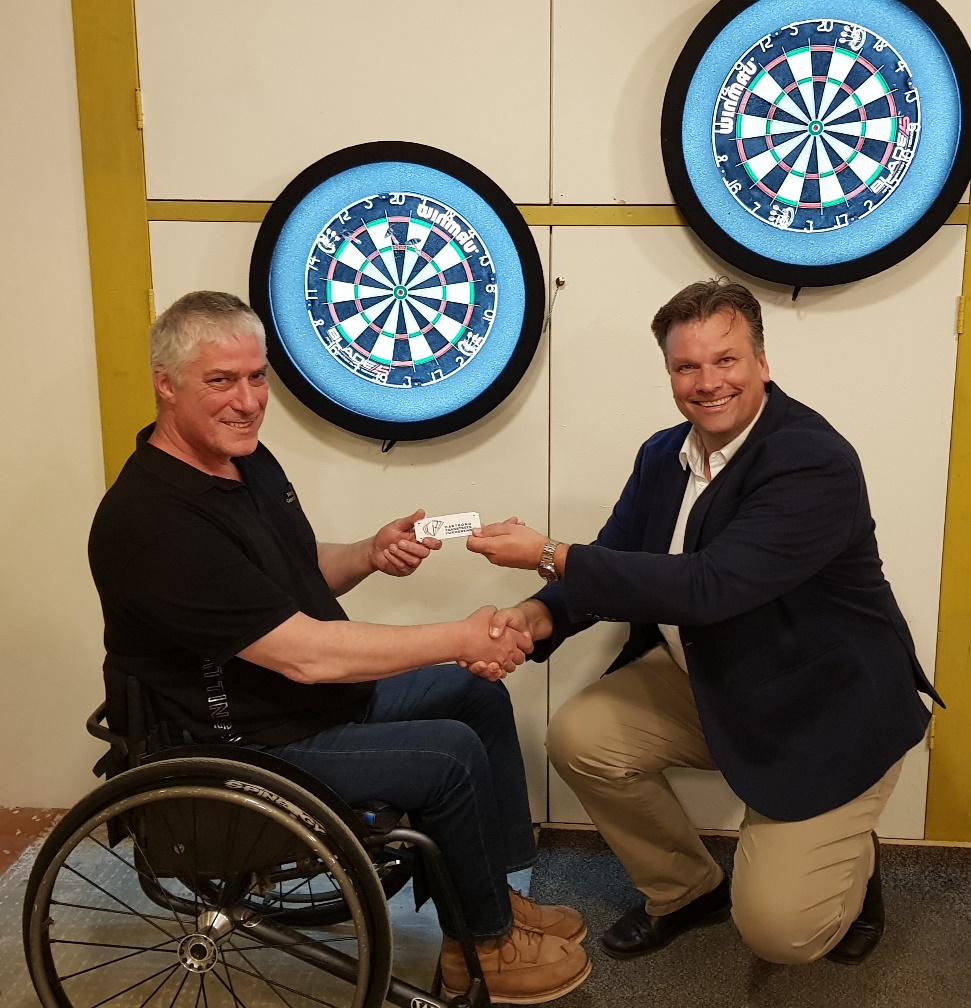 Marcel always played darts on a board that is up at a height of 1.73m. In 2019 he subscribed to the Dutch Open in Assen (NL) which is one of the largest darts tournaments worldwide. This is where he first encountered paradarts. Paradarts is for everyone with a physical disability who meets the requirements of the WDDA (World Disability Darts Association). At paradarts two boards are positioned next to each other. One is up at 1.73m for players that are standing up and one is hung at 1.37m at paradart height. The throwing distance for both boards is the same (2.37m).

”It does more justice to playing darts, because the playing field is more level”

When you’re in a wheelchair and you have to throw upwards to a board at 1.73m it takes more power. This makes the deviations in your throw larger. For years, Marcel has enjoyed playing on a board at 1.73m, despite the fact that it took quite some effort to get the darts properly onto the board. According to Marcel playing on paradart height does the performance of wheelchair darts players more justice. On the lower board you’re throwing horizontally, just like a player standing up in front of the 1.73m board, making for more clean throws. This levels the playing field, as playing from a seated position in a wheelchair no longer has a disadvantage. To Marcel, darts has become more fun now that he can compete in a fair, more equal way with darts players that are standing up.

Marcel trains almost every evening for about an hour and plays in the competition games every week. When they are playing at his home club at Lokaal de Kroon, Marcel plays on the paradart board and his opponent on the high board. If the team is short on players, he joins to competitions that are being played at other clubs, but here he often has to throw on the high board. This makes the games harder, as throwing on a high board turns winning into even more of a challenge.

In January 2020 Marcel participated in the Dutch Open Darts in Assen again. During the tournament, singles, couples and paradart matches are played. On Friday the 31st of January, the first day of the tournament, the world championships paradarts were played. On Saturday the tournament that Marcel competed in started, with 82 participating paradarters this was a big success.

Marcel: “I made it to the last 32 out of 82. I then had to compete with an Englishmen who was simply better than I am, so I lost. But I gained another experience and there will be plenty of other tournaments this year in which I will compete. Best thing is I will be able to do it in a nice shirt and my own flights with my sponsor Vicair on them.”

The Dutch Open 2020 ended on Sunday with a big finale that was played in a busy and lively hall!

As of January 2020 we are the proud shirt and flight sponsor of Marcel, who has been sitting on Vicair wheelchair cushions since 1996. You can read more about Marcel right here.