“As a little girl I had two dreams: to compete in the Olympics and to become a doctor.”

My name is Annika van der Meer and I am a Paralympic rower, two times world champion and world record holder. As a little girl I had two dreams: to compete in the Olympics and to become a doctor. I was heading in the right direction to make my dreams come true. In 2007, I had a very bad fall during a ski race. Due to damaged nerves, I became completely paralysed in my right leg, and became partially wheelchair dependent. Unfortunately, I was also excluded from the medical studies in the same period. With the help of a long leg brace (Knee Ankle Foot Orthesis) and a stiff knee, I could still walk reasonably well. With training I managed to walk better and further than the doctors had predicted.

“I set my mind on Paralympic Alpine Skiing and my study Medicine.”

At the Paralympic Talent day in 2009, I was introduced to Paralympic sports and shortly after that I started with Paralympic Alpine Skiing. Later that year I was accepted to study Medicine.  Despite the difficult combination of studying and skiing at the highest level, the Paralympic Games in Sochi in 2014 became my goal. In preparation I went to Vancouver, Canada in 2013, where I studied at the University of British Colombia and trained in Whistler – a ski resort in North America.

“Unfortunately, my good leg got seriously injured. Skiing was really over now…”

Unfortunately, I seriously injured my good leg. All my knee ligaments were torn and I had nerve damage. Despite a successful surgery, my leg was no longer good enough to walk like I did before. The orthopedist warned me that it was irresponsible to continue skiing. Skiing was really over for me now… 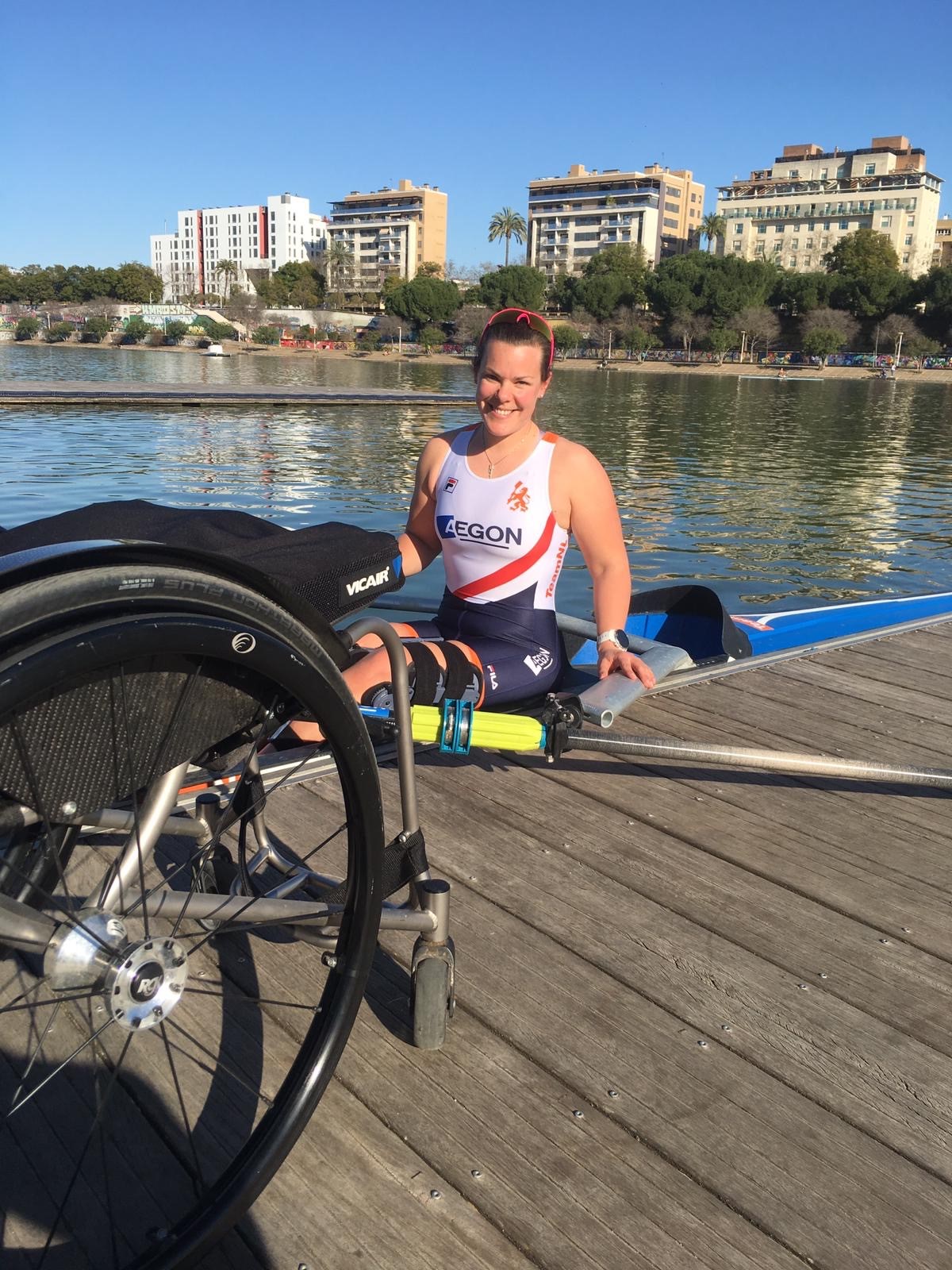 “I even made it to the World Track Cycling Championship in 2015.”

Besides skiing, I have always cycled with one leg. I was convinced that I could do that again… and I even made it to the World Track Cycling Championship in 2015. Unfortunately, my knee was damaged too much. I could not move pain-free and this took away the pleasure. By now I was using my wheelchair all day and I noticed that life was a little easier that way. In the summer of 2015 I was asked to come and row. I quite easily learned to row and two years later I became world champion for the first time.

“Working long days in the hospital, it is important for me to sit properly and comfortably.”

During my residency I made long days in the hospital. 10 hours were not an exception. So it was important that I sat properly and comfortably in my wheelchair. Although I do not have a spinal cord injury, I noticed that I was developing pressure injuries. The search for a better wheelchair cushion began. For me to be able to perform good physical examinations from the wheelchair, my wheelchair cushion needs to be stable. Also, it’s important that the cushion is able to ventilate well, for when I’m sweaty after a workout.

“Stable, breathable and good pressure distribution… The wheelchair cushion Vicair Vector O2 is the perfect match for me.”

I discovered Vicair via Social Media and tried out a Vicair wheelchair cushion through the Vicair Try out Service (a Vicair service available in the Netherlands that allows you to try a Vicair cushion for three weeks). Michel Miltenburg, accountmanager at Vicair, very skilfully helped me with this. After consulting with him I ended up trying a different wheelchair cushion than the one I thought I needed. The Vicair Vector O2 turned out to be the perfect match for me. The cushion is stable, breathable and has good pressure distribution. In the run-up to the competition season, it is possible that I may lose some weight. The cushion is easy to adjust when this happens, because of the individual cells (SmartCells). I think Vicair wheelchair cushions are the best solution to the majority of sitting problems. When choosing a cushion model, be sure to be well informed, as this will make the try-out experience even better.

“The dreams I had as a little girl have come true.”

I had been selected for the 2020 Paralympic Games in Tokyo, which unfortunately were moved to 2021 due to the coronavirus. That meant my plan to start working as a physician assistant in paediatrics in the fall of 2020, after the games, also changed. My focus was on Tokyo, which was my ultimate goal and at the same time also the end goal. These goals became very uncertain and I started asking myself what I wanted to do in the meantime, and that was one thing: to work! I started applying for jobs and got hired as a physician assistant in paediatrics. I am proud that in this special year I was able to contribute to healthcare in my own way and with a lot of passion.

Besides working I have continued my training. And since January 1, 2021, I was a full-time rower again. This way, I was able to prepare myself as well as possible for my participation in the Games and make it a great ending to my professional sports career. With a second place in the Mixed Double Rowing, it is definitely a great ending. Thanks to last year’s experience, I am more certain than ever that a beautiful new chapter in healthcare will begin after the Games. All the dreams I had as a little girl have come true!